On 6 April the largely campaigned ban on third party puppy and kitten sales, known as Lucy’s Law, finally came into force after being laid in parliament last May.

The law – named after Lucy, a Cavalier King Charles Spaniel who died in 2016 after being subjected to appalling conditions on a Welsh puppy farm – will mean that anyone looking to buy or adopt a puppy or kitten must now either deal directly with a licensed breeder, or visit an animal rehoming centre or shelter

Campaigners and pet lovers have been celebrating the great news, as well as many animal charities who have seen first hand the devastation caused by cruel puppy and kitten farming.

The Mayhew is one charity among many who rescued and rehabilitated pets who had been mistreated by unscrupulous breeders. Eight-year-old Pomeranian Cyril came to the rescue centre in an awful condition. Covered in deep wounds, with heavily matted fur and missing a couple of teeth, Mayhew suspected that he had been kept in poor conditions on a puppy farm, and had possibly been used for breeding.

Care and dedication soon brought Cyril out of his shell and a few months after arriving at Mayhew, Cyril settled down in a forever home with a loving owner who is continuing his gentle rehabilitation programme.

For the countless animals like Cyril and Lucy who have been affected by puppy and kitten farming, the passing of Lucy’s Law provided a much needed light at the end of a very dark tunnel.

As well as protecting and improving the lives of animals, the ban will also protect the public from being tricked by unscrupulous sellers and deter puppy smugglers who abuse the Pet Travel Scheme (PETS) by bringing underage puppies into the UK, which are then sold on for financial gain.

RSPCA chief executive Chris Sherwood said, “Over the last decade RSPCA staff have dealt with almost 30,000 complaints relating to the illegal puppy trade. Our rescuers have saved dogs from unimaginable cruelty and hideous conditions; our vets have tried desperately to save the lives of tiny puppies riddled with worms and plagued by health and behaviour problems; and our carers have nursed dogs back to health, teaching them to trust people again, and showing them love for the first time.

“We’re incredibly pleased that the UK Government is today introducing a ban on third-party sales of puppies and kittens in England. We believe that this, along with tougher licensing regulations that were introduced in 2018 and better education of the public on how to buy puppies responsibly, will help to crackdown on this cruel trade. We hope these laws will be properly enforced so that all dogs who are used for breeding and selling will live happy, healthy lives where their welfare is prioritised above profits.”

Due to the unforeseen circumstances that Covid-19 has brought upon us, many charities who have been picking up the pieces from cruel trade, including Friends of Animals Wales, have had suffered a huge blow. The closure of fundraising events and charity shops has meant rescuing and rehabilitating animals in need has been even harder with limited funds.

Marc Abraham or “Marc the Vet” has launched a GoFundMe for Friends of Animals to keep them afloat. The current target stands at £8,000 (the centre’s monthly cost), but the aim is to surpass it. 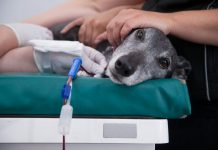