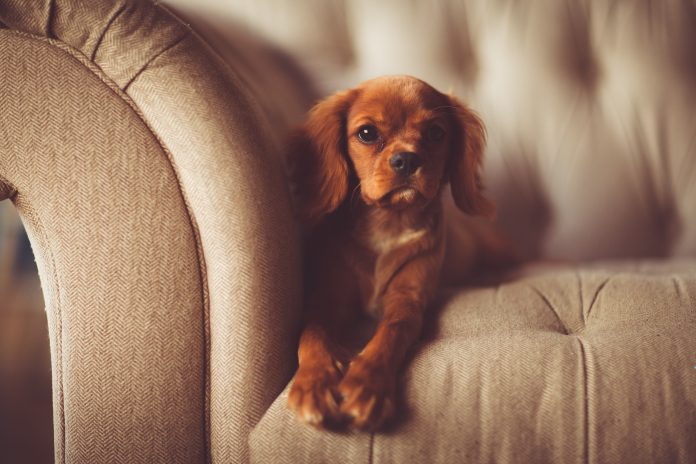 Our puppy has trained us to give him treats for doing something we don’t want him to do! We have taught him to get off the furniture, by saying, “Off” and rewarding him when he gets down. Now he keeps jumping on the sofa, just to make us tell him to get off and reward him! How can we undo this?

What a clever puppy! He’s learnt a nice chain of behaviours: jump on the sofa, wait for your ‘off’ cue, jump off the sofa and get a reward. So, effectively, jumping on the sofa is the trick that leads to a reward. Not quite what you had in mind, but it is what you’ve accidentally taught him! Don’t worry, it’s a common mistake and all is not lost. It’s actually really handy that you’ve taught him the ‘off’ cue and he clearly understands it. From now on, be more proactive with your training. At the moment, you’re reacting to him jumping on to the sofa, but you need to act before he gets the chance. If you’d prefer that he doesn’t get on the sofa at all, decide where you’d like him to lie down and settle. This is where you should focus your training. When he comes into the lounge, ask him for a ‘down’ on his mat or bed and reward that behaviour.

Think about why your puppy is jumping on the furniture – is it for attention? Is there a fun game of chase and a bit of commotion that your puppy enjoys? Is it to get comfy? Or is it just for the treats? If it’s attention he’s after, teach him that he gets lots of it when he has four paws on the floor. Engage with him and play with him when he’s on the floor. Praise him when he goes to his bed, saying something like, “Oh, what a good boy you are!” Lots of people only notice when their puppy is doing something undesirable – instead, make sure he knows you notice when he’s doing what you want. If it’s the treats he loves, he can earn those for going to his bed and staying there for progressively longer periods. Prevention is better than cure, so ensure he doesn’t have access to the sofa unsupervised. If you do miss the moment and he pounces on to the furniture, you can use your ‘off’ cue in a calm voice (no chasing, laughing or scolding). When he responds appropriately, tell him he’s a good boy, again calmly. Then ask him to lie down on his mat and reward him for that. Hold off any food reward for several seconds to give a break between the behaviours. By making sure the rewards are clearly associated with floor-based activities, you’ll see him practising those much more.