The Kennel Club is looking for four-legged heroes to celebrate at the world’s greatest dog show, Crufts.

After a pandemic pause in 2021, when Crufts had to be cancelled, the nationwide search begins again to find the UK’s top heroic dog to be crowned the 2022 winner of The Kennel Club Dog Hero Award, formerly known as the Friends for Life competition, celebrating a lifetime of friendship and recognising the heart-warming ways that dogs transform our lives.

At Crufts 2020, Golden Retriever Leo and his owner Lyndsey Uglow were announced as the winners of The Kennel Club’s prestigious award, presented by the competition’s ambassador, James Middleton – who credits his dogs and their emotional support for saving his life. Crowned as the UK’s top hero dog, Leo heads up a team of therapy dogs who visit Southampton Children’s Hospital to provide animal assisted intervention. Leo, Lyndsey and friends have been visiting the hospital up to five times a week for the past seven years, helping more than 10,000 often critically ill children. 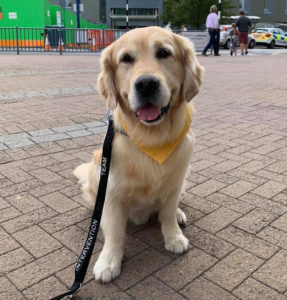 Speaking about Leo’s recognition, Lyndsey said, “The fact that the public recognised us in this way is quite overwhelming and absolutely lovely. It’s a privilege to work with the staff and patients at the hospital.”

The Kennel Club is now searching for more heartwarming and inspiring stories that showcase just how much dogs do for humans throughout their lives, and is calling for the public to nominate a canine companion who deserves to be recognised for what they do, for the newly-titled Kennel Club Dog Hero Award. Following more than a year of unprecedented isolation, stress and emotional turmoil caused by the pandemic, the organisation hopes to shine a light on those canine lockdown lifelines who got their owners through difficult times, and the huge support, comfort and companionship dogs give to so many.

The winner of the Kennel Club Dog Hero Award, which is supported by the Kennel Club Charitable Trust, will be revealed at Crufts 2022 in Birmingham on Sunday 13th March, and will be awarded £5,000 for a dog charity of their choice. Runners up will receive £1,000 for their chosen dog charity.

The public are being asked to nominate their four-legged heroes in the following categories:

The nominations are open until 12th October 2021 and five finalists will be chosen to go forward to the final at Crufts 2022, where the overall winner, selected by public vote, will be announced before the grand finale of the Crufts Best in Show award on 13th March.

Vanessa McAlpine, Crufts Show Manager said, “We are very much looking forward to holding the Kennel Club Dog Hero Award competition at Crufts in 2022. Every day there are dogs out there saving lives in war zones, giving confidence and independence to those with disabilities – both mental and physical – and showing remarkable bravery and loyalty as pets, and our newly-named competition will showcase all that our four-legged heroes do for us. With multiple lockdowns and the stresses and isolation caused by the pandemic, we know that now, more than ever, dogs have been and continue to be a lifeline for so many, and we want to celebrate those everyday heroes who help us through the most difficult times.

“We want to hear from anybody who has a heartwarming tale about how their dog has changed their life for the better, or how a canine companion has made a difference for a friend or family member. The winner will take centre stage at Crufts 2022, an event which is dedicated to celebrating the diverse role that dogs play in society and all the ways that they enrich our lives.

“We encourage anybody who knows of a four-legged hero to put them forward for recognition in this competition and showcase all the reasons why our dogs are known as ‘man’s best friend’.”

Nominations can be made by visiting  crufts.org.uk/dogheroaward. Finalists will be announced next year, ahead of the winner being crowned Crufts 2022, taking place at the NEC in Birmingham from 10th to 13th March 2022.