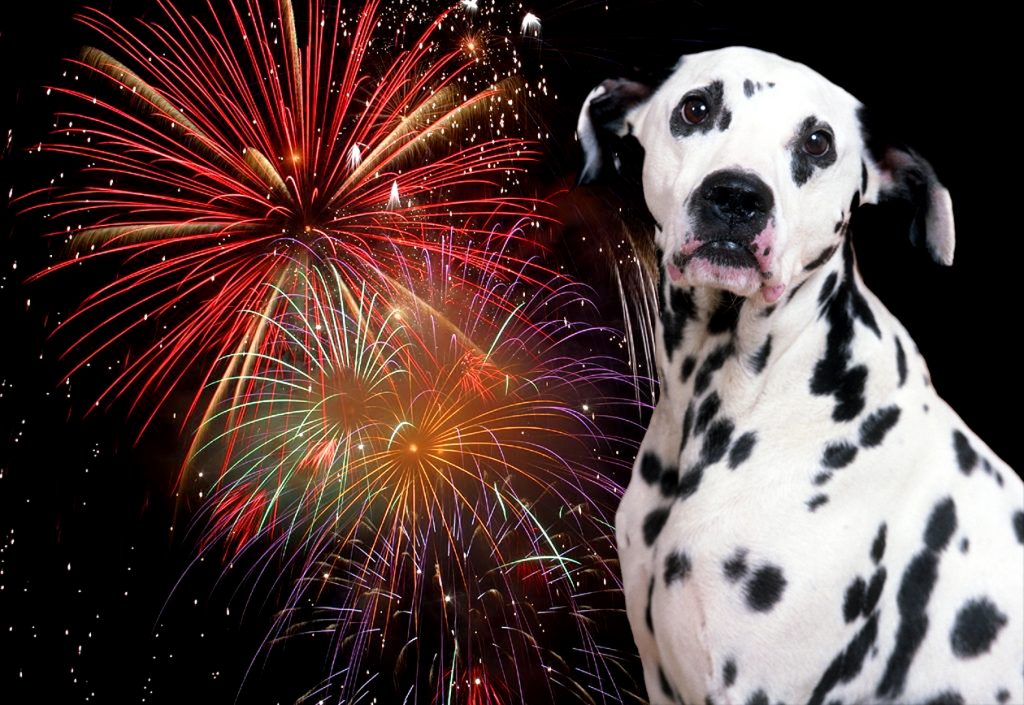 We’re in the middle of the worst part of the year for animal lovers – fireworks season. With Bonfire Night, Diwali, Christmas and New Year in the space of two months, followed by Chinese New Year, thousands of homes will be dealing with terrified pets, who can cause serious damage to themselves and their environment in their panic to escape what can sound like World War Three.

There have been heartbreaking cases of dogs dying from frantically escaping and then being hit by a car. Of dogs hiding, in sheer terror, shaking long after the fireworks have ended, and generalising their fears to other associations. Of pets that have gone missing, never to be seen again. Of horses that have fallen victim after escaping their fields and being killed on the road, or of their stables catching fire from stray fireworks.

The RSPCA says that fireworks are highly disturbing to birds and have caused the abandonment of nests or even whole colonies; that other wildlife is similarly affected; and that farm animals can injure themselves on fencing and farm equipment when frightened by the explosions.

The Firework Campaign Group, formerly FAB, has long campaigned for a change in legislation, telling us, “We believe that current legislation that allows their use every day from 7am to 11pm (later on the traditional dates, Bonfire Night until 12 midnight, 1am for Diwali, New Year’s Eve and Chinese New Year), needs to be addressed.”

It secured another debate at parliament’s Westminster Hall on 8th November and said “much was debated” despite being constrained for time and having a limit of three minutes for each MP.

The debate can be watched on iPlayer at https://www.bbc.co.uk/iplayer/episode/m001223t/westminster-hall-fireworks

A spokesperson for the Firework Campaign Group continued, “Leading the debate was Elliot Colburn MP. You may have seen or filled in his survey on social media ahead of the debate. It had 1.2 million hits, was shared 12,000 times and had 75,000 responses. Firework legislation is literally a hot topic. 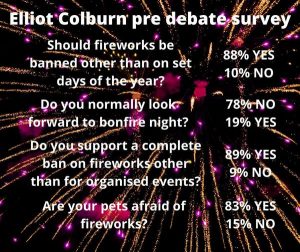 “We know that many MPs have been contacted by their constituents and have received favourable replies rather than the standard ‘fireworks are used responsibly’ type letter we received prior to our very first debate in June 2016. In previous debates, MPs have stood to argue the case for the firework industry; in this debate, not one MP stood to defend them. This indeed is progress.

“Please don’t be despondent at the Minister’s rebuttal at the closing of the debate; it is his job within government to argue the case for no change. MPs even got the Minister to agree that government needed to publish reports that had been previously promised. It then was admitted that they had not even started them. We wait for the Minister to come good on his word.

“We were very pleasantly surprised by the number of MPs who took a stance and put forward their own thoughts and opinions as well of those of their constituents. All 11 MPs who spoke told of differing situations on how firework use affect us, our families, our pets, livestock and wildlife. It was accepted that not only are fireworks detrimental to the welfare of animals but of humans too, with MPs quoting from their constituents. This is a huge turnaround of opinion and will help moving forward – well, you didn’t think we were going to stop, did you?”

The Firework Campaign Group’s Change petition https://chng.it/7ZyDMVMzWP is currently at over 911,000 signatures. Once it receives one million, the campaign will deliver it personally to No 10 Downing Street.

Importantly, if, in the coming months, you see illegal activity with fireworks, report it to the police on 101.

In the meantime, the group advises “continuing to write to your MPs so that they are unable to deny there is a problem in their constituency. Please continue to fill in the RSPCA reporting survey. If you have horses and have problems with fireworks, please report to the BHS. We need continued data to push forward and you are the ones to provide this.”

Further information can be found at https://fabfireworkcampaign.org