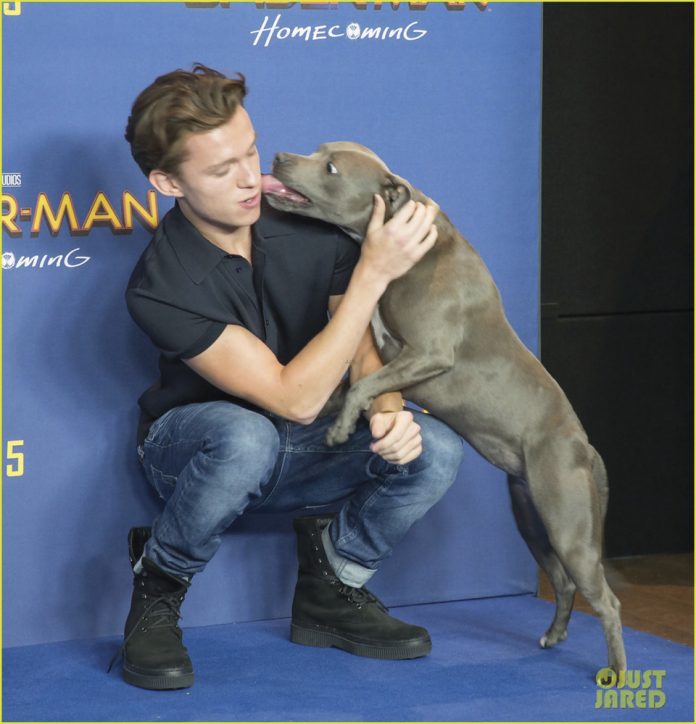 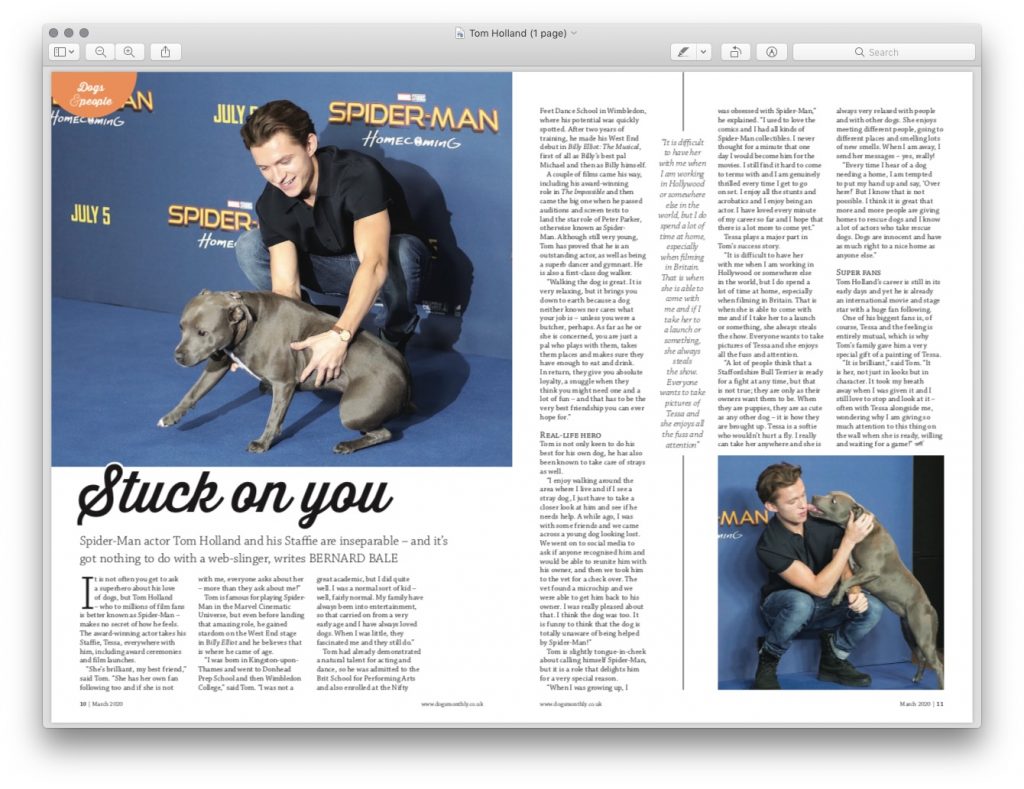 It is not often you get to ask a superhero about his love of dogs, but Tom Holland – who to millions of film fans is better known as Spider-Man – makes no secret of how he feels. The award-winning actor takes his Staffie, Tessa, everywhere with him, including award ceremonies and film launches.

“She’s brilliant, my best friend,” said Tom. “She has her own fan following too and if she is not with me, everyone asks about her – more than they ask about me!”

Tom is famous for playing Spider-Man in the Marvel movies, but even before landing that amazing role, he gained stardom on the West End stage in Billy Elliot and he believes that is where he came of age.

“I was born in Kingston-upon-Thames and went to Donhead Prep School and then Wimbledon College,” said Tom. “I was not a great academic, but I did quite well. I was a normal sort of kid – well, fairly normal. My family have always been into entertainment, so that carried on from a very early age and I have always loved dogs. When I was little, they fascinated me and they still do.”

Tom had already demonstrated a natural talent for acting and dance, so he was admitted to the Brit School for Performing Arts and also enrolled at the Nifty Feet Dance School in Wimbledon, where his potential was quickly spotted. After two years of training, he made his West End debut in Billy Elliot: The Musical, first of all as Billy’s best pal Michael and then as Billy himself.

A couple of films came his way, including his award-winning role in The Impossible and then came the big one when he passed auditions and screen tests to land the star role of Peter Parker, otherwise known as Spider-Man. Although still very young, Tom has proved that he is an outstanding actor, as well as being a superb dancer and gymnast. He is also a first-class dog walker.

“Walking the dog is great. It is very relaxing, but it brings you down to earth because a dog neither knows nor cares what your job is – unless you were a butcher, perhaps. As far as he or she is concerned, you are just a pal who plays with them, takes them places and makes sure they have enough to eat and drink. In return, they give you absolute loyalty, a snuggle when they think you might need one and a lot of fun – and that has to be the very best friendship you can ever hope for.”

Tom is not only keen to do his best for his own dog, he has also been known to take care of strays as well.

“I enjoy walking around the area where I live and if I see a stray dog, I just have to take a closer look at him and see if he needs help. A while ago, I was with some friends and we came across a young dog looking lost. We went on to social media to ask if anyone recognised him and would be able to reunite him with his owner, and then we took him to the vet for a check over. The vet found a microchip and we were able to get him back to his owner. I was really pleased about that. I think the dog was too. It is funny to think that the dog is totally unaware of being helped by Spider-Man!”

Tom is slightly tongue-in-cheek about calling himself Spider-Man, but it is a role that delights him for a very special reason.

“When I was growing up, I was obsessed with Spider-Man,” he explained. “I used to love the comics and I had all kinds of Spider-Man collectibles. I never thought for a minute that one day I would become him for the movies. I still find it hard to come to terms with and I am genuinely thrilled every time I get to go on set. I enjoy all the stunts and acrobatics and I enjoy being an actor. I have loved every minute of my career so far and I hope that there is a lot more to come yet. “

“It is difficult to have her with me when I am working in Hollywood or somewhere else in the world, but I do spend a lot of time at home, especially when filming in Britain. That is when she is able to come with me and if I take her to a launch or something, she always steals the show. Everyone wants to take pictures of Tessa and she enjoys all the fuss and attention.

“A lot of people think that a Staffordshire Bull Terrier is ready for a fight at any time, but that is not true; they are only as their owners want them to be. When they are puppies, they are as cute as any other dog – it is how they are brought up. Tessa is a softie who wouldn’t hurt a fly. I really can take her anywhere and she is always very relaxed with people and with other dogs. She enjoys meeting different people, going to different places and smelling lots of new smells. When I am away, I send her messages – yes, really!

“Every time I hear of a dog needing a home, I am tempted to put my hand up and say, ‘Over here!’ But I know that is not possible. I think it is great that more and more people are giving homes to rescue dogs and I know a lot of actors who take rescue dogs. Dogs are innocent and have as much right to a nice home as anyone else.”

Tom Holland’s career is still in its early days and yet he is already an international movie and stage star with a huge fan following.

One of his biggest fans is, of course, Tessa and the feeling is entirely mutual, which is why Tom’s family gave him a very special gift of a painting of Tessa.

“It is brilliant,” said Tom. “It is her, not just in looks but in character. It took my breath away when I was given it and I still love to stop and look at it – often with Tessa alongside me, wondering why I am giving so much attention to this thing on the wall when she is ready, willing and waiting for a game!”

This article, written by Bernard Bale, featured in the March 2020 issue of Dogs Monthly

The latest film, Spider-Man: No Way Home, was released on 15 December 2021 in the UK 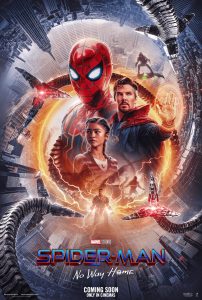