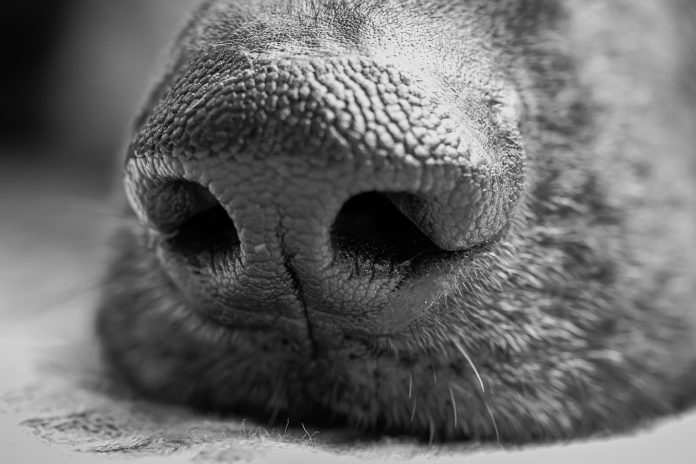 We all know how incredible a dog’s sense of smell is. Not only can the average dog locate a fox poo within three miles or a dropped morsel of food in an entire woodland, but they can also detect drugs, find missing persons, and medical detection dogs can even sniff out cancer or tell when someone is about to go into a diabetic coma. And now, detection dogs are being used by professional landscapers to identify, locate and treat rhizomes in Japanese knotweed. This pervasive weed, which untreated can scale up to 10cm per day, needs a specialist eradication plan to prevent future unwanted growth.

Japanese knotweed can be identified by its above-ground appearance, but it can also be just as elusive and difficult to spot when it’s below the soil. Defined as an aggressive weed, Japanese knotweed has gained a reputation in the UK as more than a nuisance. Known for damaging properties, including concrete foundations, this weed can access unusual or awkward spaces and exploit weak spots to incur lasting damage. This is often why professionals advise that developers and homeowners alike stress identification of this weed as much as plan its strategic removal.

If unmanaged over time, trace amounts of knotweed can recur in the wild, regenerating itself and affecting your property and any neighbouring ones. The consequences of having Japanese knotweed detected on your property can be as costly as rejected mortgage applications or lowered property values.

When Japanese knotweed grows elusively on a property, either in tight spots or buried in shrubbery, dogs can be a nimble and quick solution to identify this weed. Whether a riverbank or marsh, detection dogs are trained to traverse different and challenging terrains, even when trace amounts of the weed are buried under the surface.

Agile and efficient, detection dogs can assess a property for Japanese knotweed without extensive excavation or incurring delays. Regardless of the weather or conditions, dogs can sniff and detect weeds throughout the seasons, even when there’s rain, mud, or snowfall.

Critically, dogs are unlike conventional resources. The likes of traditional tools and equipment are not only manual and laborious to operate, but can often seem intrusive, especially if excavation needs to occur to detect or remove weeds. Detection dogs, however, can smell rhizomes with their fine-tuned noses regardless of the climate, season, or conditions.

When it forms, even dormant, as a rhizome below the surface, knotweed can be at its most dangerous. The costly reputation and perception of the weed means that any trace amount on a site will immediately harm the value of land and delay construction. These can rapidly create new colonies, spreading and sprawling across the land, at times infecting neighbouring areas.

When the dogs visit a site

Travelling in canine teams, and steered by a handler, sniffer dogs will visit a site or property when there’s suspected presence of Japanese knotweed. If a TA6 form is marked as “not known”, and where the presence of knotweed is unmeasured, a team of detection canines will visit a site and detect anything in the topsoil, dormant or active, and including trace amounts that remain invisible and before it develops above the surface. Below the ground, dogs can detect weeds reliably down to 1 metre.

Detection dogs are endlessly trainable, cost-effective and introduce new efficiencies where traditional or manual tools struggle to quickly cover challenging terrains in uncooperative weathers. Detection dogs also offer near-perfect accuracy, covering the same terrain as their human counterpart in often half the time, or less. In as short as an hour, a dog can examine a site for knotweed, which is a feat that could take five people eight hours to achieve.

Where traditional tools and methods can be reliable and effective, detection dogs are a cost-effective, efficient means of covering a site and identifying trace amounts of knotweed no matter if it’s sprouting above the ground or hiding invisibly below it.

With snouts refined and sharply attuned to the environment around them, detection dogs really are a home owner’s best friend!