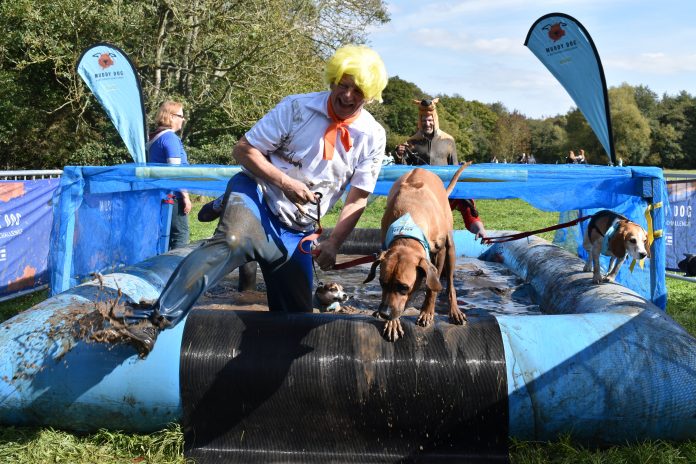 On the last weekend of September, Battersea Dogs & Cats Home held it’s Muddy Dog Challenge in Tunbridge Wells. 800 animal lovers and their dogs travelled to Eridge Park to muck in and raise money for the animal welfare charity. The event, proudly supported by LV=, raised at incredible £66,000 which will go towards the vital care of the animals that come into the charity, which has a local centre in Brands Hatch.

The Tunbridge Wells Muddy Dog Challenge was made up of 18 obstacles suitable for both humans and four-legged friends to crawl, climb, wade and jump through with the option of taking part in the 2.5k or 5k course. Participants included Battersea Ambassador and internationally renowned model, David Gandy, who took part with his ex-Battersea dog, Dora.

David commented, “This is the third time I’ve taken part in the Muddy Dog Challenge. Dora absolutely loves it. It’s been a great day seeing everyone muck in, and of course, raising money for charity. It’s great that we’ve raised lots of money this weekend so that Battersea can continue to help the thousands of animals that come in every year.”

Geraldine Bird took part on Saturday with former Battersea dog, Teddy. The Jack Russell Yorkshire Terrier cross is three years old and was adopted by Geraldine to help with the residents at Oak Lodge residential home where she works. The residential home is for people with learning and physical disabilities based near the South Downs in East Sussex. Teddy has become part of the home with the residents taking him for a walk every day, bringing joy to everyone’s lives. Doing this challenge was Geraldine’s way of saying thank you to Battersea.

Other participants included the ‘Farningham Frolickers’ who took part in the challenge dressed as the Mystery Gang from Scooby Doo. Su Hewitt who was dressed as Velma, said, “We thought we’d dress up for the occasion as this is the second time we’ve done the Muddy Dog Challenge. We held a pop up tea party for the local villages which raised over £1,000, so it’s been great.”

Registration for the remaining Muddy Dog Challenge events in Peterborough and Manchester is now closed, but keep checking the website for more information about next year’s events soon at www.battersea.org.uk 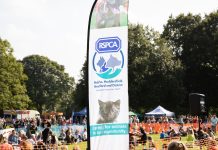